The ForkenSwift is a 1992 Geo Metro converted from gasoline to electric power with used forklift parts (electric motor, etc.), used golf cart batteries (and a golf cart motor controller) and a pair of near-dead "host" cars. It was built by two friends, designed from the outset as a low cost, medium-speed runabout for use in a small, quiet city (Brockville, Ontario, Canada).

This site documents the conversion in detail.

Latest update: 6000 kilometers later: what have we learned? 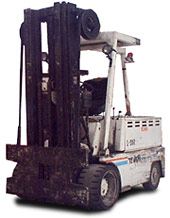 Many of the components used in the conversion came from an old forklift: a decomissioned mid-1980's Baker FTD-110 (a 16,600 lb beast) that we bought, stripped of all its electric/electronic components, and then sold the carcass to a metal recycler.

Since doing this project, now when I see an electric forklift I think, "EV conversion kit in a box!" A really, really heavy box. Some assembly required. Batteries not included. (Seriously - it didn't come with the forklift battery, which would have weighed another 3,000 lbs.)

Here's the loot salvaged from the forklift:


Cheap conversion: the secrets of keeping it under $1000

The ForkenSwift's claim to fame is that it was done on a shoestring budget: it was on the road on October 11, 2007, legally registered and insured as an electric vehicle, for a net cost of $672 including the car.

Since then, that figure has crept up to $997.60 (May 28, 2009), with some upgrades and additional components bought. And it may creep up further as we continue tinkering/refining.

How the heck did we manage to do it so inexpensively?


With a little help from our friends

We're very grateful to the following bunch of enthusiastic & helpful people and organizations who contributed to the project through inspiration, education, moral support, generous discounts or donations of time & materials.

Three questions Ontario residents often ask: 1) anything special required for the safety check / certification? 2) How did you get insurance; 3) How do you change the registration to "electric" to get a Drive Clean emission test exemption? 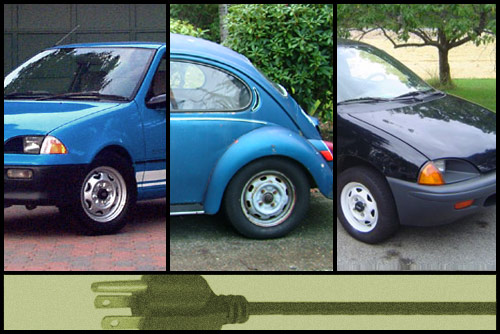 It might seem easy to dismiss the low-cost ForkenSwift as an unrealistic one-off, assembled by obsessively cost-conscious builders. But since it was built, two more affordable, electric runabouts (their motors also sourced from used forklifts) have hit the streets. Which lends proof to the idea that electric drive does not have to be prohibitively expensive for the motivated tinkerer.

Read about them here...

One of the most expensive parts of an EV conversion is the motor controller (particularly if you want something more powerful than a golf cart - which is what the ForkenSwift uses). DIY types often dream of building their own powerful, inexpensive controllers, but few do it. Until now - EcoModder members Paul and Sabrina have done it, and they're sharing their results.

Update: April 15/07 - Well, it's official now. The ForkenSwift has an EV Album entry, a rite of passage for any home-brew EV. And surely earned after its first electric test drive. 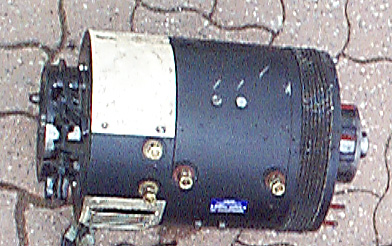 Update: April 12/07 - Motor sold! We've decided to part with the 12 inch drive motor from the forklift. (Actually it's more like 11.75 inches.) Originally we had planned to use this 230+ lb torque monster in the car, but its diameter was too big for the car's transaxle (it would have interfered with the right axle). This motor would probably be better suited for a RWD conversion (more space, plus more torque to move a bigger vehicle) or a really big FWD transmission. More information here.

January 13/07 - the attention from AutoblogGreen prompted me to put up this page in place of the "coming soon" placeholder that was here yesterday.