The ForkenSwift was built by combining the best parts from a 1993 Suzuki Swift (which turned out to be too rusty to use) and a 1992 Geo Metro. The cars were essentially the same. The only big difference was the Suzuki had a 4-cylinder engine where the Metro had a 3-cylinder.

Why did we choose this car for the ForkenSwift?

1992 Geo Metro before we bought it 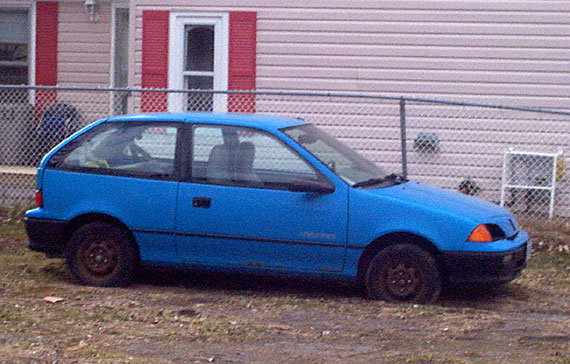 1992 Geo Metro before we bought it
Not a day after deciding the red 1993 Sukuzi Swift was too rusty to repair, I spotted this 1992 Geo Metro in Ivan's neighbourhood, settled into ruts in someone's yard. It looked like it hadn't been driven for quite a while.

I knocked on the door of the house, and the woman who answered said, "why sure it's for sale!"

After jump starting it, the car ran & drove, though there was the smell of gasoline at the rear, a hole in the exhaust and something loose in the front suspension.

A quick look underneath revealed the body was in much better shape than the red car, though on initial inspection it looked like there were a few rust spots in the floor that would need to be patched.